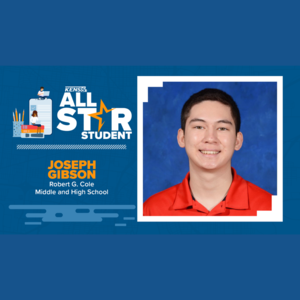 Congratulations to Cole Sophomore Joseph Gibson for being named a KENS5 All-Star Student! KENS5 will air a story on Joseph during their 10:00 pm newscast on April 6th and again during their April 7th 6:00 am newscast. The story will then be featured on their website. Click the headline above for details about some of Joey’s amazing accomplishments.
Joseph Gibson, a sophomore at Cole, has a GPA of 4.0. He is presently the top student in his class. Additionally, he is in JROTC where he is the A-Squad Leader and the Battalion S-4 Non-Commissioned Officer. Joey is the President of the National Honor Society, is active in Academic Decathlon, Student Council, the Boys’ Basketball Varsity Team, Band, University Interscholastic League Academic events, JROTC Leadership and Academic Bowl, and Boy Scouts of America. He was part of the State Champion Boys’ Basketball team, was chosen as the JROTC Cadet of the year, was awarded the Robert G. Cole ELOC Award , received the Outstanding Pre-Freshman Engineering Award (3 years), and is an Eagle Scout. His community service consists of Student Council projects, the Boy Scouts of America Service Project, San Antonio Military Hospital Toy Project, the School Locker project and a Senior Living Service Project.
Print