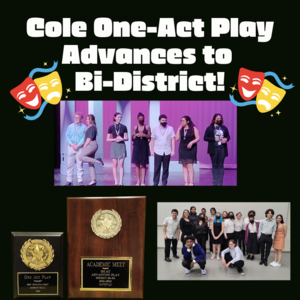 Recently, the Cole One Act Play students put on a beautiful performance of their show, "Over the River and Through the Woods". They represented Cole very well and had the audience laughing and crying throughout the show.
We are happy to announce that they were selected as an Advancing Play and will compete at the Bi-District competition Friday, March 11 in Ingram, TX.
The tech crew also won Best Technical Crew out of all competing schools and the following students won several individual awards including:
Congratulations!
Print